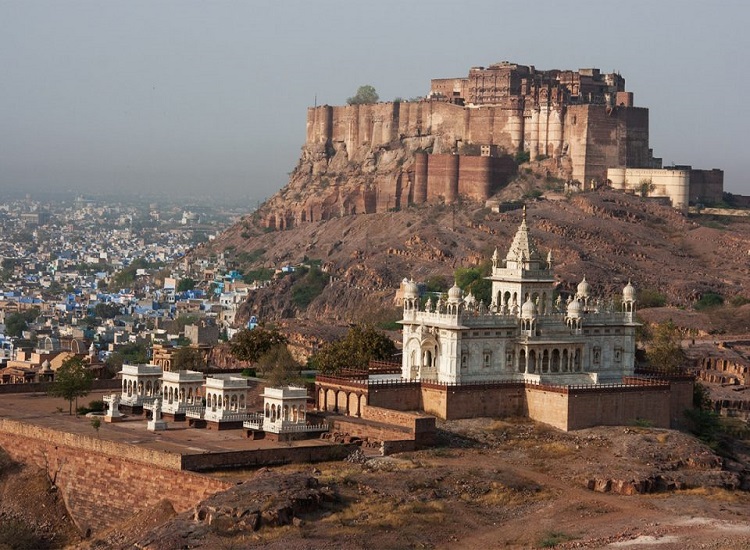 Top Places to Visit in Jodhpur

Jodhpur is the blue city of Rajasthan and the most popular destination. This is also called Sun City as you can see here the sun rising. This city is founded by Rao Jodha in the year 1499. It is the second-largest city of Rajasthan.

1. Fort of Mehrangarh
Spectacular construction of red sandstone located on the top of a hill 125 meters above the blue houses of the old city. In the 15th century Rao Jodha, from the Rathore dynasty, moved the capital from Mandore to Jodhpur and had the fort built in an impregnable place. It was successful because the fort was never conquered because the access doors are uphill and at an angle of 90 degrees, which made the races of the elephants useless to try to knock them down. It is accessed by 7 elaborate doors that enclose a labyrinth of alleys with numerous patios, temples, and palaces.

Jayapol – Gate built-in 1806 by the Maharaja Man Singh to commemorate the victory over Jaipur and Bikaner.

Fatehpol – Known as the Gate of Victory was built by the Ajj Singh Maharaja to commemorate the victory over the Mongols, still retains the remains of cannonballs.

Lohapol – An iron gate that preserves the footprints of the women of the Maharaja Man Singh who immolated themselves in their funerary pile.

Moti Mahal or Palace of the Pearl – The strongest palace of the fort and has 5 bedrooms with small hidden balconies from which the queens listened to the judgments without being seen.

Sheesh, Mahal or Hall of Mirrors – Covered with mirror fragments of different sizes and colors forming an authentic mosaic.

Sukh Mahal or Palace of Pleasure – Surrounded by gardens and linked to the main palace by an underground tunnel.

Phool Mahal or Palace of the Flower –Adorned with gold leaf and was used for musical representations. It has an interior courtyard where the ancient marble throne used for coronations is kept.

2. Jaswant Thada
Jaswant Thada is the mausoleum of Maharaja Jaswant Singh II built by his son Sardar Singh in the year 1899. It is made with finely sculpted white marble sheets that reflect the sun’s rays elevating the grandeur of the building. It surrounds a beautiful garden of several levels with a small lake from where you have spectacular views of the city. Inside the cenotaph are two other tombs and portraits of the last rulers of Jodhpur.

3. Umaid Bhawan Palace
Ummaid Bhawan Palace was commissioned by the Umaid Singh Maharaja in 1929 to house the residence of the royal family and they have lived there ever since. For its construction 15,000 workers were used who were fitting the stones one on top of the other without using any type of mortar, the stones are made of chittering limestone which gives it a pink and white tone. It has 347 rooms and is one of the largest private residences in the world, although currently half is designated as a hotel. You can only visit a small museum about the recent history of the royal family located inside the Palace.

4. Clock Tower
It was built by Sardar Singh in 1911 in the center of the old town next to the market that later took its name. The bazaar and the surrounding streets are always buzzing with merchants and buyers haggling prices. You can wander for hours through its small shops where you can buy almost anything you can imagine.

Gym for Your Next Holiday Travel

How to Eco-hack Your Us Vacation